BlackBerry KeyTwo : BlackBerry has been one of the biggest companies and one of the popular choices for smartphones before the market was dominated by Android and iOS. After being quiet for years at a stretch, the company finally launched its newest addition, BlackBerry KeyOne.
BlackBerry finally came back in the game with what it does best. The company created a high-security smartphone with a beautiful QWERTY keyword. With that, it is obvious there was a sequel planned!
All that you need to know about BlackBerry KeyTwo
The once mobile giant plans its KeyOne’s success with a sequel and here is what you need to know:
Launch: BlackBerry KeyTwo  is said to launch on 7th June this year in New York. There is no news about other events planned by the company as of now. However, it is believed that this launch will be done on a global scale. Other than this, there is still no news about which carriers will sell this smartphone. 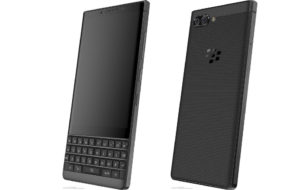 Design: In terms of design, the leaked images show that we can expect a look-alike version of the KeyOne with some tightened up designs. The design for BlackBerry KeyTwo is pretty much the same as its predecessor with some tweaks here and there. The top bezel has been squeezed, and the phone has a gentle curve. BlackBerry made the right choice by keeping the unique design in place.
Specs: The BlackBerryKey2 stays the same with specs as well. Although it does get an upgrade in its RAM, the overall power composition of the phone remains especially low compared to its competitors. According to the Techoveral of the phone, this phone still lacks a punch. The phone is powered by Snapdragon 660, a thing of past and will come with an extended RAM of 6GB or 4GB. Furthermore, the phone is rumoured to house a 64GB storage onboard.Other than this, it is possible that the BlackBerry KeyTwo phones will be launched with Android Nougat (7.0). At this moment no other BlackBerry device has received an Oreo update, and it is possible that this new flagship phone will run on 7.0 and will promise updates soon. 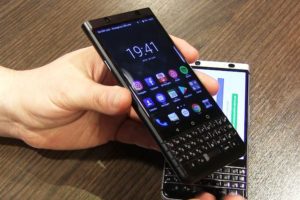 Price: With its limited features and limited new additions compared to its predecessor, BlackBerry needs to be extremely cautious while pricing this device. Although BlackBerry has a knack for creating durable and good phones, the features and the power of the KeyTwo simply does not cut it. The price is expected to be anything from £450 to £500 this year as well.
Furthermore, according to the renders and the leaked images of the BlackBerry phone, it is rumoured to house a new key on the keyboard. Since the image is not clear and the key cannot be viewed properly, it is expected that BlackBerry has added an app drawer on the keyboard. If that is the case, then BlackBerry’s design would get an instant upgrade.
However, at this moment fans and BlackBerry lovers only have speculations and leaked images to base their thoughts on. The much-awaited launch will clear out many hazy details about the phone.