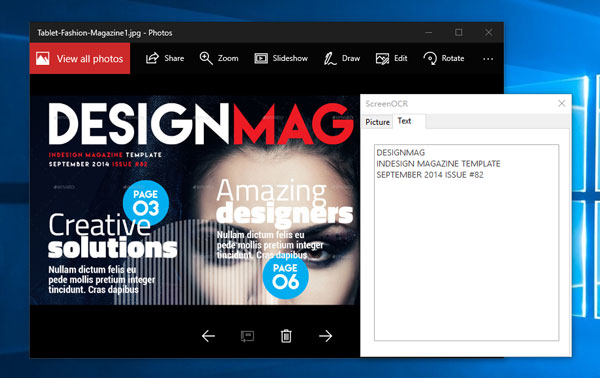 The capability of grabbing text from screenshot and image could boost your productivity. There is no need to retype them and you can produce error-free text document. If you are looking for a smart and handy tool to convert image or screenshot to text, then you are landing on the right place. In this post, a free screenshot OCR program is recommended so that you can ocr screenshot on both Windows and Mac platforms.

How to grab text from screenshot on Windows

It is quite simple to ocr screenshot when Easy Screen OCRis installed on Windows system or Mac system. Walk through the next a few steps you will get the trick to convert screenshot to text.

Easy Screen OCR is not only a windows software but also a mac ocr app. This mac osocr software is now available on App Store and you can get it downloaded there for free. The process of ocr screenshot on Mac is quite similar as on Windows. If you are a Mac user, it time to give this free mac ocr app a try.

In this post, we have revealed a trick to ocr screenshot on both Mac and Windows with a free ocr software. To improve productivity and ocr screenshot in high accuracy, you should have a reliable and cost-effective program. Then, Easy Screen OCR should be the one which deserves a try.