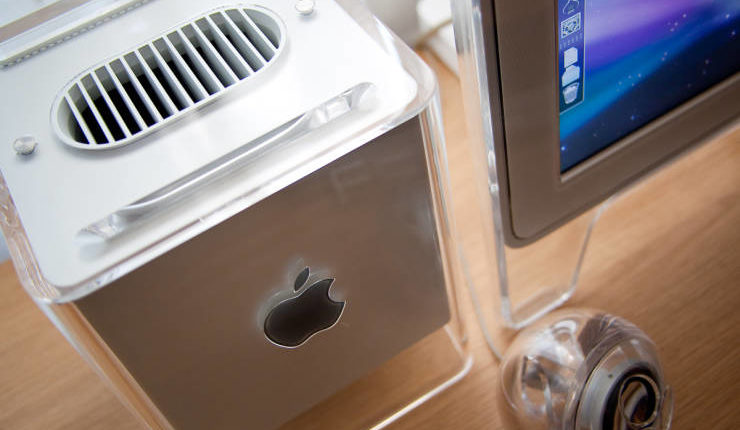 PowerMac in the cube

Like the brilliant painters, each of whose paintings is worth a fortune today, this computer “died” in poverty. In the cruel world of real things, there is no place for poetry.

PowerMac G4 Cube was announced on July 19, 2000, provoking an ovation and numerous responses in the media. True, they wrote about him differently. In the opinion of some, Apple once again changed our perception of how computers should look and what they should be like. Others claimed that no one in his right mind would buy it.

It was a computer in the form of a cube. True, a cube with a side of 18 cm “floated” in a case of acrylic glass, the height of the outer shell was 25 cm, and the side of its square base was 20 cm. According to the cleverest, this cube was not even a cube, everywhere is deception, reptiloids, and RenTV.

The iCube, like a submarine, had two bodies. The internal, the body of the computer itself, was removed from the outside with the help of simple manipulations, opening access to the banks of RAM, hard disk and graphics card. With a “regular” autopsy, the warranty was not violated, and a screwdriver was not needed for this.

By the way, do not call the PowerMac G4 Cube “iCube” communicating with pedantic specialists, as I call it, at your own peril. Maybe someone already called him by that name, it just begs, but it’s really unofficial. Especially do not call it “Cube”.

Cube is considered a failure of Steve Jobs, but it’s not true. The maniacal attraction of Steve to computers in the form of a cube, working absolutely silently, is widely known, and his share of “guilt” in this failure is. In addition to Steve, in this failure, another urban crazy, of British origin, Sir Jonathan Ive, put his soul into it.

Irresponsibly believing in the statement “beauty will save the world”, they made an attempt to earn on this law of nature – but, apparently, this statement is not true.

Quoting Makarevich, “The castles of the air are not carried by the Earth …”.

The phenomenon of iCube to the people 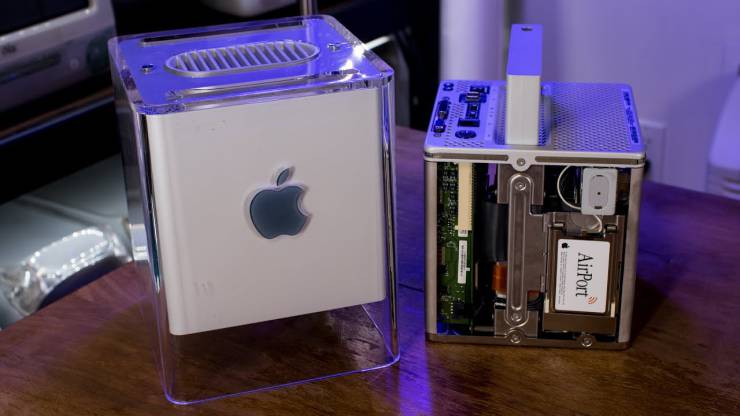 July 19, 2000, a little worried, Steve showed the public the main character of our story, saying that this tiny cube, according to the official classification, is not just a beautiful little thing, but also a real supercomputer. Fact, by the way.

It works absolutely silently because it does not have a single fan. The cooling system works by natural convection: a very difficult engineering problem, by the way.

Having given this child to the form of a cube, Steve repeated the design of his other failure, named NeXTcube. Because it is a beautiful completed form, the same as that of Al Ka’ab in Mecca in Saudi Arabia.

The first cube was offered in two configurations, “good”, with a PowerPC 7400 (G4) processor with a clock speed of 450 MHz, 64 MB of RAM and a hard Ultra ATA disk with a capacity of 20 gigabytes, and a “better” one, the same PowerPC, but with a clock a frequency of 500 MHz, 128 megabytes of RAM and an Ultra ATA disk of 30 gigabytes. However, the model was only one, the rest could be picked up to your liking in the online Apple Store. 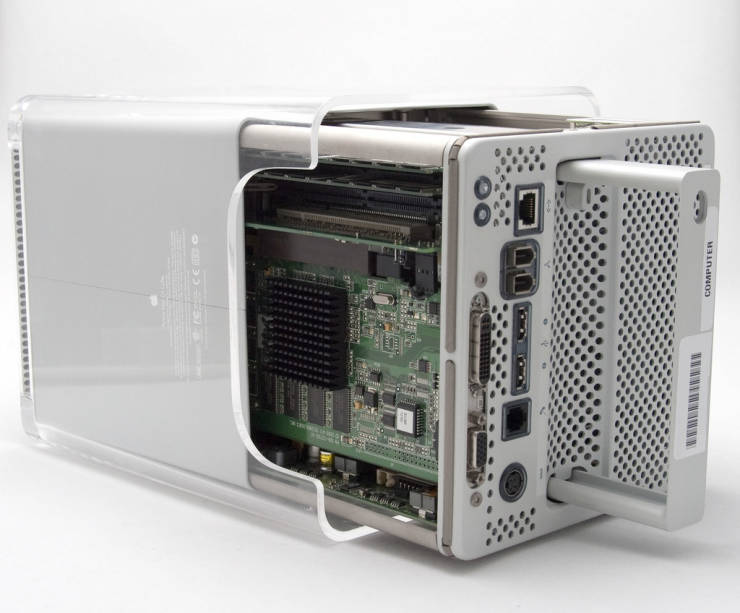 The cube, until now, is the only Mac without built-in speakers. In its internal case there really was no place for decent speakers, so they were made external, developed in conjunction with Harman Kardon, in the form of glass balls with a bright black filling, absolutely fantastic kind.

The speakers had to be connected via a USB amp and complicated the lives of the unfortunate who wanted to play iCube, forcing the Cube to be connected to its acoustic peripherals on its own. The periphery was included in the kit of Cuba, and as I was told by experts, today the collectors have an amplifier with transparent speakers which is almost more expensive than iСube on the day of its birth.

Also Check: What changed in iOS 12 for iPad

The monitor had to be purchased separately, Apple recommended its own, either a 15-inch Apple Studio Display or the “best LCD display in the world”, a 22-inch Apple Cinema Display. This is 38.1 cm and 55.8 cm, respectively. The latter cost 4 thousand, however, in those days all LCD-monitors with similar characteristics cost about the same, and were considered “pampering.”

After the Apple Cinema Display, displays of conventional monitors on the cathode-ray tubes seemed crooked and not fully focused, however, this effect quickly passed.

The cube worked perfectly and with much cheaper third-party monitors.

Complete with a computer supplied a completely fantastic mouse, Apple Pro Mouse, optical (without moving parts, contact with the surface, hermetically closed from the outside world), tracking changes in position 1500 times per second.

About the Cube, as well as about NeXTcube, it would be possible to tell for a very long time, both machines are unique …

The miracle of design in a cruel world

Apple assumed that the Cube would occupy a place in the product line between the PowerMac G4 in the mini-tower and iMac, but the Cube in exactly the same configuration was more expensive than its “older brother,” the regular PowerMac G4, by $ 200. For the Cube from 450 MHz, 1799 dollars were taken, for the Cube from 500 MHz – 2299.

A tax on beauty? For example, although I like beautiful things, I prefer the maximum available processor clock speed (preferably not one), more volume of operative and “disk” memory, and … As it turned out, I am not alone.

Moreover, in reality, Cuba showed shortcomings. No, he did not overheat, he worked without the slightest problems for months without rebooting, he made no noise (although during the operation of a DVD or CD-RW drive, the vibration was transferred to objects standing on the same table with him), and as to a workhorse, there were no claims.

The claims were from those on whom Jobs and I’ve hoped, from aesthetes and lovers of beauty. Due to imperfections in the production process, scratches quickly appeared on the outer shells of Cuba. They spoiled the view, completely without affecting the mechanical strength, but the aesthetes were deceived in their best feelings.

In addition, the price. Those who needed a powerful Mac, admiring the online store for the Cube, and a little dreaming about it, switched to the regular PowerMac G4 and … bought it.

Fighting the tide and a fairy tale without end

Most likely, the price of Cuba was somewhat overestimated. When it became clear that sales are lagging behind expectations, prices were lowered … In December 2000, at $ 300, the cheapest iCube was cheaper than a similar PowerMac G4 for $ 100.

In February 2001, the lineup was updated, the PowerPC 7400 processor was replaced by a more economical and less heat-generating PowerPC 7410, the initial configurations in the online Apple Store were now three: the “good”, similar to the previous base, now cost 1299 dollars, “And” the best “DVD drive was replaced with CD-RW, and the amount of RAM is increased.

The problem with scratches was solved. 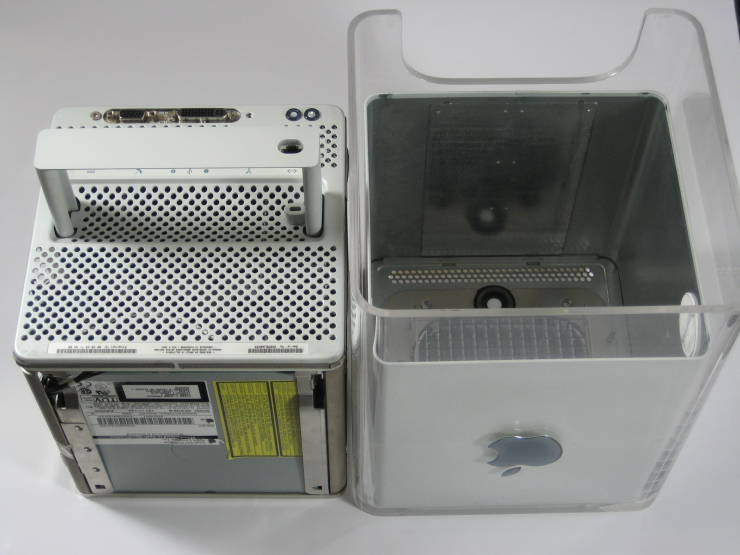 Sales have grown, from very weak to just weak. Perhaps the sales could become more lively if the processor is replaced with a more powerful one – but then we would have to recalculate the cooling system and radically change the design if such a task had a solution at all … There was no certainty of the success of this step.

In July 2001, 11 months after the announcement of the PowerMac G4 Cube, and 10 years after the start of its sales, Apple, through the mouths of Phil Schiller, suspended production and sales of Cuba. Kubov still was not on the list of canceled Mac models even in 2017, maybe not all is lost?

We are what we leave after ourselves …

Having existed for less than a year, during which only 150 thousand of its copies were bought, the PowerMac G4 Cube, nevertheless, managed to achieve something and left a mark.

16 The cubes were used during the filming of the Startrek Enterprise, for managing the breadboard models of the Enterprise bridge and its “engine room”, all the special effects and animation were also created on them, in Macromedia Director.

These days they have become the pride of collectors, and important exhibits of computer museums around the world, and not just computer ones.

One of these computers became an exhibit of the Museum of Modern Art in New York.