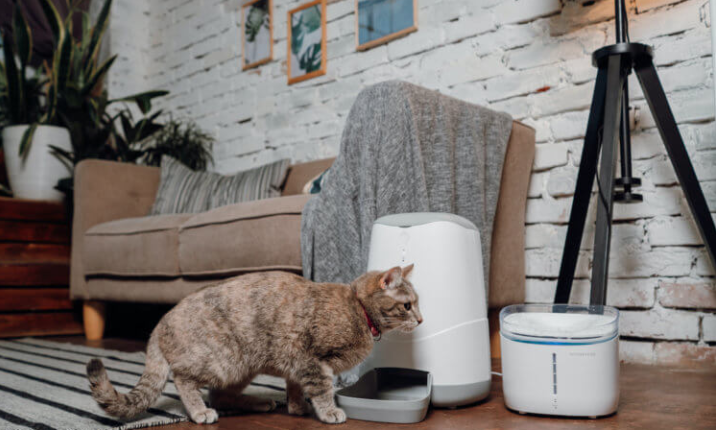 Everything is fine in pets, but they need to be cleaned and fed. Unfortunately, you won’t do anything with the first, but in the second, modern technologies sometimes come to the rescue, thanks to which your beloved Murzik or Sharik will be fed and watered. Even if you left for a few days, you can not worry and not look for someone who will come to feed him twice a day. I, as the owner of two cats who love to eat, know what it is to stay on Friday and feed them only in the middle of the day on Saturday. I recently tried modern gadgets and now I will talk about their pros and cons. 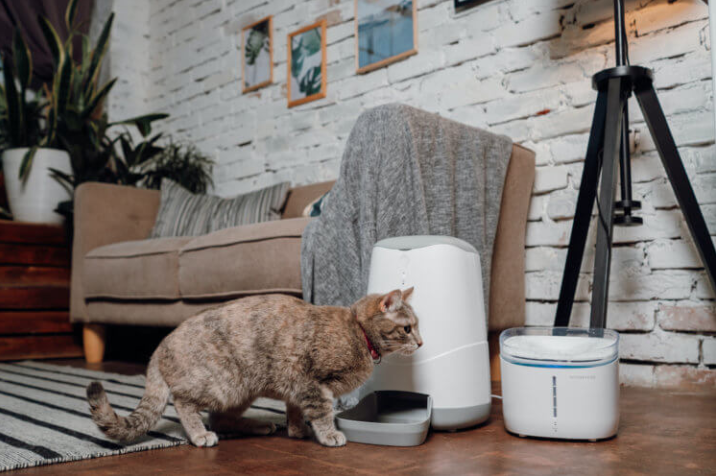 Like it or not, a cat or a dog is also alive. They cannot tell about their needs, but they must be looked after. If you want to give your four-legged friend a long and happy life, you should take care not only of his proper, but also timely nutrition.

Sometimes, as indicated above, I can come home late, go on a business trip for a couple of days, or just take a mini-vacation, and each time I had to look for someone who would fill my bowls at least once a day (but every day) cats feed. Of course, I always find such people, but I have to strain them and make them redraw their own plans. This is not always convenient.

Not so long ago we found an automatic feeder and drinker from Petoneer. They work in automatic mode, can warn of problems and take on the process of ensuring the vital functions of the pet.

How to feed a cat during vacation?

Naturally, the first thing I decided to set up a feeder. At one time, I already bought one such gadget, but it did not work very long. The mechanism very quickly wore out and jammed, and my cat also learned to “negotiate” with this feeding trough so that it would give him food whenever he wanted. 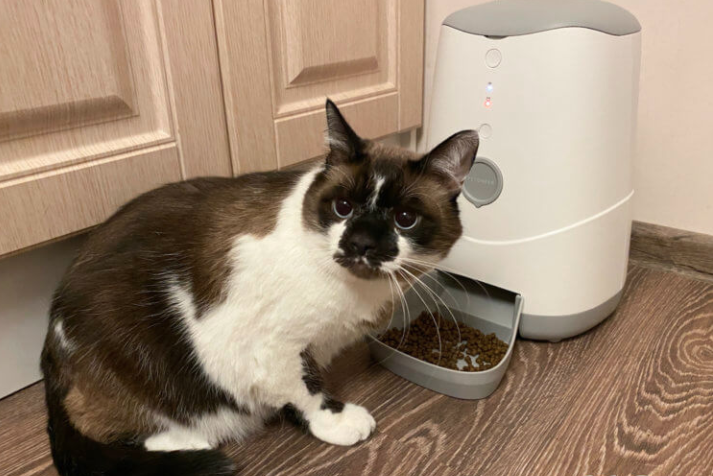 The comb, which spun and measured portions, was very low there and my cat learned to scroll with its paw (I personally caught him doing this). As a result, he overate, and the feed ended very quickly.

Another drawback of that feeder was the setting mechanism, which looked like an old electronic alarm clock. It was necessary to clamp something, then successively pressing other buttons to set the time. In general, it was darkness.
The Petoneer Nutri Feeder is completely different. An application is used to configure, and the mechanism has protection against jamming and is located high – “agree” will not work. But let’s talk about everything in order.

After downloading the application to your smartphone, you will need to go through the first stage of configuration. To do this, you need to create an account and add a device. The process of adding will require just a couple of minutes and a couple of clicks. You will only need to select the type of device to be added from the list and enter the network data so that the gadget connects to Wi-Fi.

When everything is done, you can immediately try to give out a portion of the feed or adjust the feeding schedule for each day of the week. The schedule includes feeding time and the number of servings issued at a time. After that, if notifications are enabled, you will receive confirmation of successful feeding or error reports. For example, about the lack of feed in the tank.

A large tank with a capacity of more than three liters is provided for the feed, the lid of which is locked and opens from the button. The inside of the tank is pulled out so that it can be cleaned. The closure of the lid is tight, which prevents the smell from escaping. For feeding from below, there is a tray in which the food is poured. As I said, if the feed gets into the mechanism and wedges it, a reverse movement is provided, which will allow stirring the blades. With this mechanism, failures are virtually eliminated. 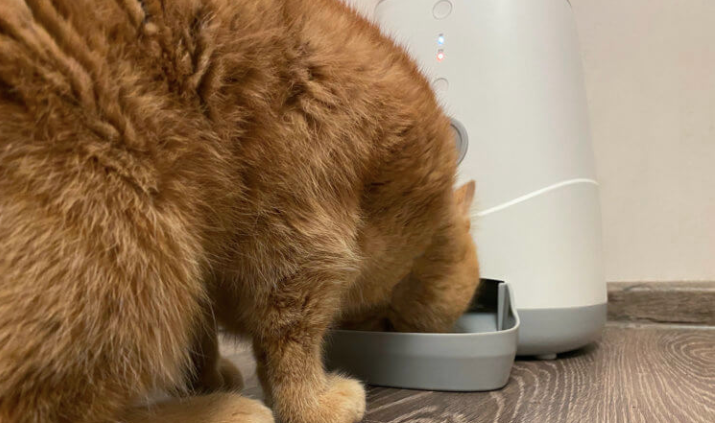 Feeding the feeder is possible in two ways. To do this, at the bottom there is a microUSB connector. You can connect with any power adapter . I tried the bundled adapter from the old iPhone on 1A and everything worked. In addition, you can power the feeder from Power Bank. To do this, on the back wall there is a special compartment in which there is a regular USB and a lot of space for the battery itself. Flat Xiaomi at 10,000 mAh fit there with a margin of thickness – there is a lot of space.
On the front panel, in addition to the buttons for opening the lid of the store and the button for the single dispensing of a portion of feed, there are two indicators. The first shows the status of the device and the network connection, and the second starts blinking orange when the feed is running out.

How to drink a cat?
When a cat eats dry food, he needs to drink more. Of course, you can pour him a basin, from which he will drink for a week. But the one who tried to do this 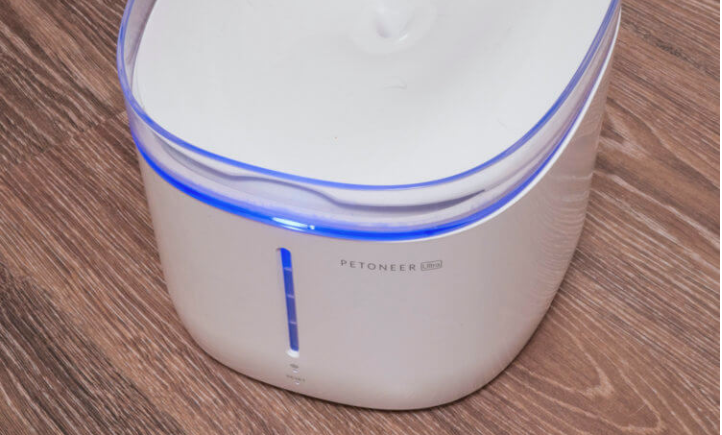 saw how, after a very short time, the water turns into almost a flowering swamp. House dust comes into it, which is far from always visible with the naked eye, but which is many just next to the floor, where the bowl is. In addition to dust in the water, hairs and hairs still begin to float, either from a favorite sweater or from the cat himself.

All this not only looks so-so, but also not particularly useful for the animal itself. Now I’m not even talking about bacteria that breed in this water, like rabbits in full supply.

If you don’t like this development, Petoneer has a Fresco Ultra automatic drinker that can solve all these problems, and I also used it.
It is small in size and consists of several parts. Among them is the water tank itself with a volume of about two liters with a pump that can be turned off. This entire tank is placed in a kind of glass, which makes the appearance more aesthetic , hiding the mechanical insides, and allows not to disconnect the device from the power supply every time it needs to be rinsed.

The tank itself is covered by a lid, the task of which is to hold the filter, and the top lid is placed on top, along which water will drain inside. A filter is needed so that the water is always clean. Over time, when the time comes to replace it, this can be easily done. They are sold and are very inexpensive. 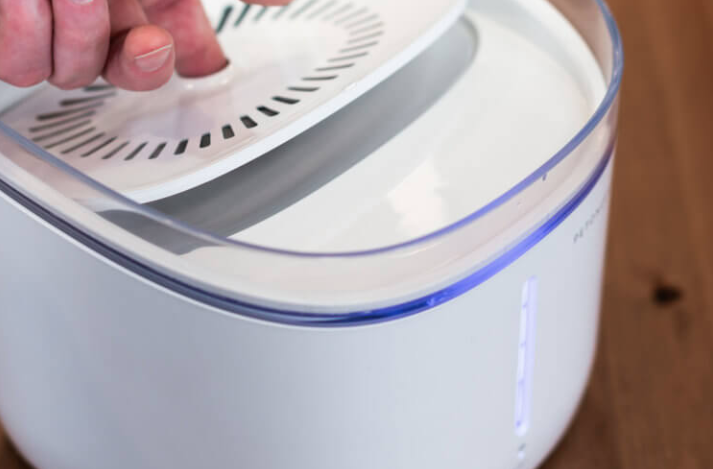 Cleaning is carried out in several stages, at which not only suspended particles, but even harmful bacteria are screened out. To eliminate them, there is an ultraviolet lamp inside, which kills almost one hundred percent of all harmful microorganisms. UV should not be underestimated, as they even handle public transport at night and sterile rooms in hospitals.