What is “audio sharing” and how to configure it in iOS 13?

We continue to talk about the new features of the latest version of iOS with a lucky number 13. One of the nice, and, most importantly, free innovations in this version of the operating system has become audio sharing. This feature is actually not so new, and most of all it resembles sharing music from one device using a splitter into two pairs of headphones, only now everything has become more expensive and fashionable. Although the principle remained approximately the same, no additional adapters and other wires are no longer required for this.

When it comes to the collaboration of Apple devices, Cupertino always tries to do everything in the highest rank. AirPods wireless headphones are one of the prime examples. You just buy them, open them next to the iPhone, and the headphones are already connected to it yourself.

So, audio sharing is the ability to share music by broadcasting it from your iPhone to the wireless headphones of a person sitting next to you. To do this, you can simply connect two pairs of “ears” to the iPhone running iOS 13, after which the music from it will play in both pairs of headphones. You can also use AirPlay 2 if one of the listeners has a device with 12 or earlier version that supports this technology.

The best and easiest way to share music with a friend is only available if both participants have iOS 13 installed. In this case, all you need to do is just bring one device to another. The way young people do in the photo above.

For example, one person has a movie on the iPad that he watches with headphones. The second user wants to join the viewing, so he brings his iPhone to it, the first agrees with the question about the broadcast of sound that appears on the screen, after which the audio stream from the iPad begins to be duplicated into the headphones of the second user, while both can independently adjust the volume in their headphones .

At first glance, there is nothing of the kind in this, but it is for those who did not listen to music together from the same player with a splitter. In fact, the ability to reduce or add sound can be a very convenient addition to the function described above. 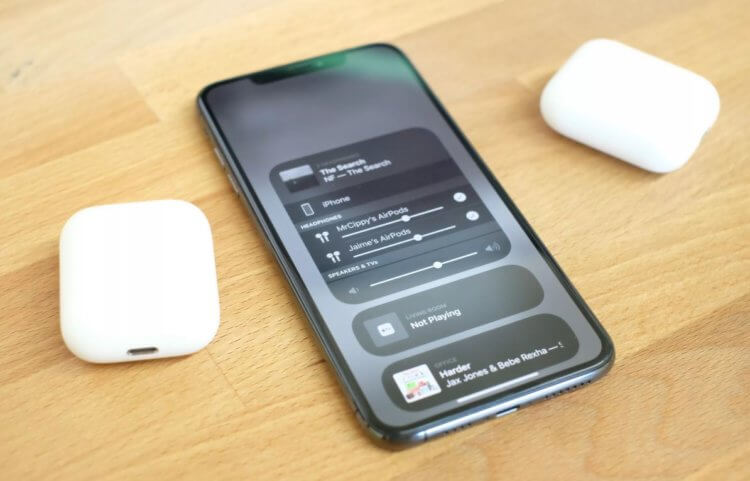 Unfortunately, this feature is not available to everyone. Owners of both generations of wireless AirPods do not have to worry – they certainly will not be a problem. Probably some other models will also work, but, alas, the only officially supported headphones besides AirPods are PowerBeats Pro. As for devices that support the technology, there are several more models among them:

If you have other headphones, but they are still supported, then write to us about this in the comment! Let’s collect the base of working headphones together.