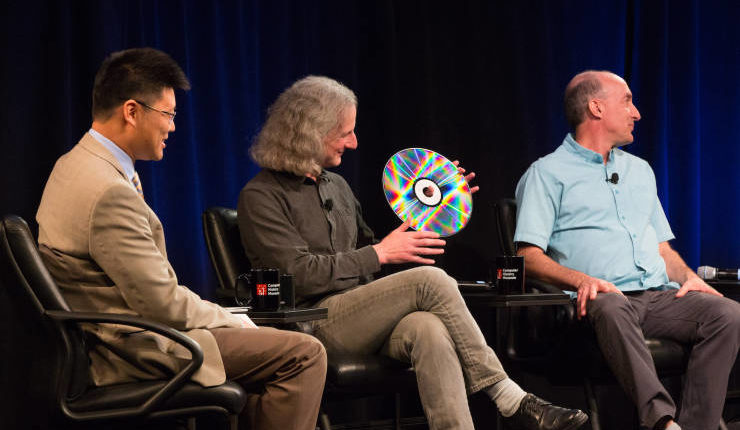 QuickTime and a little bit about WWDC’90 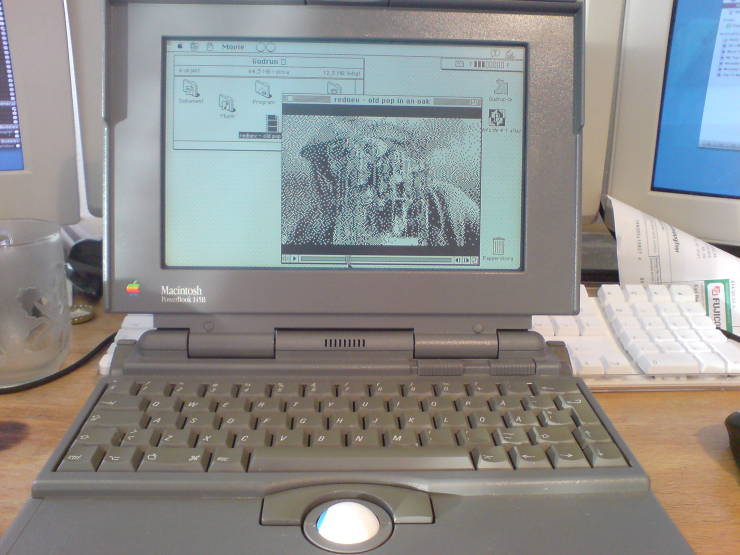 A few years after the revolution in publishing, there was another revolution in the world. As in 1985, it was paid and arranged by Apple Computer. Then there was the iPod, iPhone, iPad before our eyes augmented reality was born … Where is the world going?

The revolution in publishing divided the world into “before” and “after” – printing production fell in price by a couple of orders, became available to everyone, and glossy magazines appeared, with little or no information. And many other things, useful, reasonable and kind, but no longer count how many people the gloss has disaccustomed to think.

The revolution in multimedia has divided the world into “before” and “after”, its side result has become an audio-visual generation that prefers to use information in someone’s prepared visual form, without straining its own imagination and simplifying everything that can and can not be done.

Computers and the Internet were also created for exceptionally good purposes, but people quickly learned how to use them to damage each other.

At one time Plato, not the one about whom much is said in our day, but the philosopher of antiquity who “is a friend to us, but the truth is more precious,” warned about the harm … of writing.

At that time, enormous volumes of sacred and scientific (and such) content were memorized by heart. A fantastic memory training, a disciplining mind. In addition, the knowledge of an educated sapiens, like a sword in a scabbard, was always with him, at a distance of thought.

Something is losing in these bloodless (almost) revolutions, we are gaining something else, and the world is still alive. Is this normal, or will we finish badly one day?

This three-minute animated movie was the first step to creating QuickTime. It was created in 1988 in ATG (a group of advanced technologies), on Apple. For several years it was used to test the technology being developed, others were added to it – but it was the first.

It was not created on Macintosh II at all, in 1988 it was absolutely impossible. And on computers Macintosh II. The plural is important. There were a lot of them.

First, frames were created (frames), there were slightly more than five thousand. Each frame “weighed” about megabytes. All together they occupied 5 gigabytes of disk memory. At that time, the most powerful personal computers (the same Mac II) had, on average, 2 megabytes of RAM, and hard disks of 40. The 160 MB disk was the limit of dreams.

The drawing of each frame required a lot of time, but for their transformation into the video, with synchronous soundtracks, considerable computational efforts were required. In those days specialized workstations (with Unix) for hundreds of thousands of dollars were used for these purposes. To digitize the video, ATG used a whole “farm” of dozens of Macintosh II, and a huge storage of memory (the size of the original data of 5 Gigabytes, plus all sorts of intermediate data) was a crazy experiment, both in price and time and forces spent on it.

And the idea itself was insane and unreal. But in 1988 or 1989, after the head of ATG showed the clip to John Scully, accompanied by explanations and comments, the dream turned into a project with the code name QuickTime.

In the directive on the opening of the project, its financing and the right of access to information about any developments of the company (!), There was an enumeration of its tasks: multimedia, video, audio, much more … working with faxes.

Multimedia at the beginning of time

The term “multimedia” in the late 80’s meant a hodgepodge of unrelated video, audio, and texts. About her a lot of writing and reasoning, but no one knew what it is and why it is generally necessary. A fashionable topic for a secular conversation, no more.

Doug Callejon, who became the QuickTime product manager in 1990, came to Apple in the early 1980s, right after the university, to the Multimedia Marketing Department. He developed and promoted video and audio cards first for Apple II, then for Mac. That’s what they understood by multimedia. Funny? 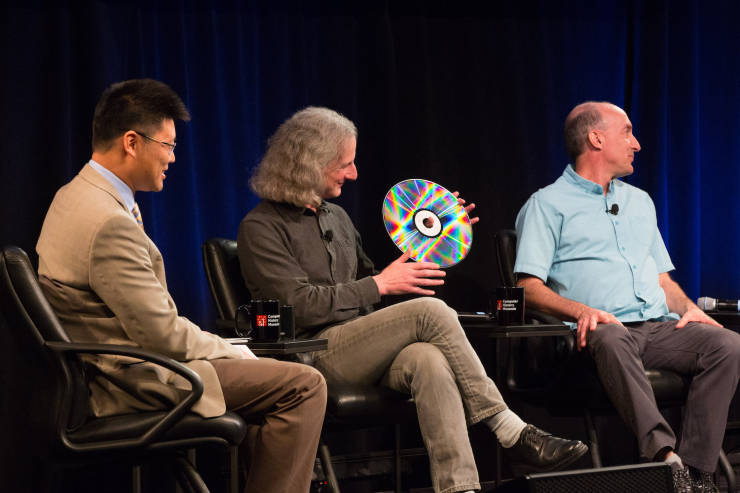 Video at that time was analog, almost everything. It was distributed on tapes or on videodiscs (similar to CD-disks, only twice as large as a diameter), on each side of which they could fit for up to 30 minutes. On the photo, a laserdisc in the hands of Peter Hawley. Peter was one of the main developers of QuickTime, from 1990 to 1999. To his right was Bruce Lick, the head of the QuickTime development team from 1990 to 1992.

Digital has already been invented, but it existed somewhere on the far periphery and did not seriously interest anyone.

The most multimedia complex for viewing a video of that time included a Mac, a TV and a player of laser video discs connected by wires. The program for managing the complex was written in HyperCard and was able to switch between parts of the video and was able to navigate in it. 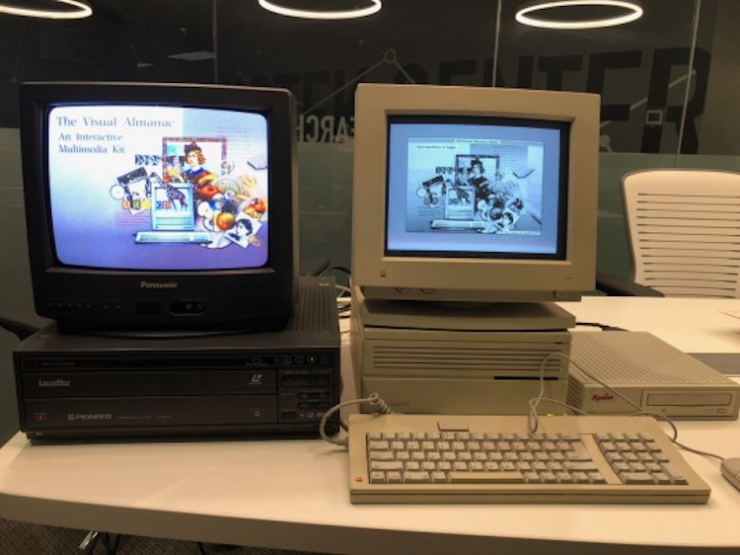 The complex was not particularly fast: to go from one place on the laser disk to another, another place had to be found, it took several seconds. Compiling the “index” side of the laser disk accelerated the search to almost instantaneous, but took 10 or 15 minutes. Half the viewing time. On the disk, you could save three or four indexes (for one and a half or two laserdiscs).

But, nevertheless, it was already close to the topic than video and audio cards.

Also Check: 6 magic devices from Apple, which we’ll by no means see

It was not without involuntary deception. Dan Casey, a senior Apple marketing officer at one of the 1990 WWDC sessions, told third-party developers about the Warhol project and showed them the workings of a group of advanced technologies.

He asked the third-party developers for help. Invited them to participate in the project. There are so many unsolvable difficulties in this venture!

Dan knew, in general terms, the development of a multimedia-related project, and participated in meetings on this matter in the group of advanced technologies. He wanted better, but it did not turn out right.

In fact, he deceived the audience. The Warhol project was already in the past in 1990, those who worked on it now worked in a separate group, in a building across Mariani Avenue from the building in which the company’s marketing department and a group of advanced technologies were located. The project was already called QuickTime, and it even had its own flag. Casey simply did not know about it.

Mariani Avenue is a few bands with very intense traffic, just do not run across.

Nothing in the world costs as much as information security measures. In addition, alas, the lack of this protection.

What Casey showed to the developers was wonderful and interesting, but in QuickTime, not a single line of code from the examples of the new technology he showed was not included. All this was used to create the Pencil Test, and it was forgotten. Now everything was done differently.

The creative efforts of third-party developers turned out to be of no use to anyone. Working in the team QuickTime (work, nerves, nosy) reacted to amateur proposals, not in the best way. Apple’s reputation has suffered real damage, but no one has been punished. Scully came to the conclusion that he was to blame.

Beginning with WWDC’91, the representatives of the management and security services, well informed about everything in the company, began to get acquainted with the materials of the WWDC sessions, for the purpose of avoidance and prevention.

With Steve, among other things, he spent a lot of time and effort on maintaining the aesthetics of all appearances at WWDC, he personally attended their rehearsals, often several times, demanding to replace those incapable of intelligible exposition – and even fired someone.

Apple’s rise to zero did not happen on its own.

In the fall of 1990, in Atlanta, Georgia, EduCom conference participants demonstrated the first multimedia application using QuickTime, although nothing was said about the QuickTime itself (not yet announced and the secret project).

Such applications are called “kiosk”, I do not like this name – but, as far as I understand, it was the very first “kiosk” in the world.

The application was developed jointly by the University of Georgia (Clayton Sanders) and Apple Computer (Greg Grech). It was called “News Navigator”. According to Greg, in honor of Roller John Scully’s “Knowledge Navigator”.

I do not deny that from our jungle this may seem like a “bend” before the authorities, but most likely, nothing about this Greg even though, especially since the “News Navigator”, which was created under his leadership, was not a video, but a real one and a useful application, similar to that in the world yet was not.

The application was implemented in HyperCard, the main screen was a list of news headlines, with links to related news, photos, and videos. The news list was updated in real time (if there is a good communication channel, for example, Ethernet 10 Mbit / s), the video was provided by CNN. Video clips were converted to QTFF format and saved on a file server.

For those who followed the demonstration, it was like pure magic. What they were shown exceeded the capabilities of the then technology, and the EduCom members knew it very well.

In the sequel – the disclosure of the secret of magic, and the explanation of some unexplained phenomena, the origin of MPEG-4 and why Apple Computer needed QuickTime for Windows.

How can a frameless iPad Pro with Face ID look like?