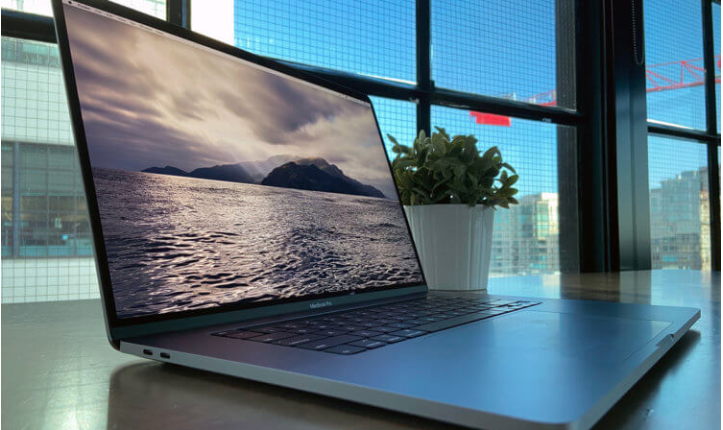 Every Apple product has a mystery. Something inhuman that makes one doubt their earthly origin. Or vice versa human? In the body of representatives of our biological species, from time to time, previously unknown organs are found. There is a flaw in this analogy, but we will not dwell on it – a mysterious sensor was found in the 16-inch MacBook Pro, similar to which it has never been in apple laptops. 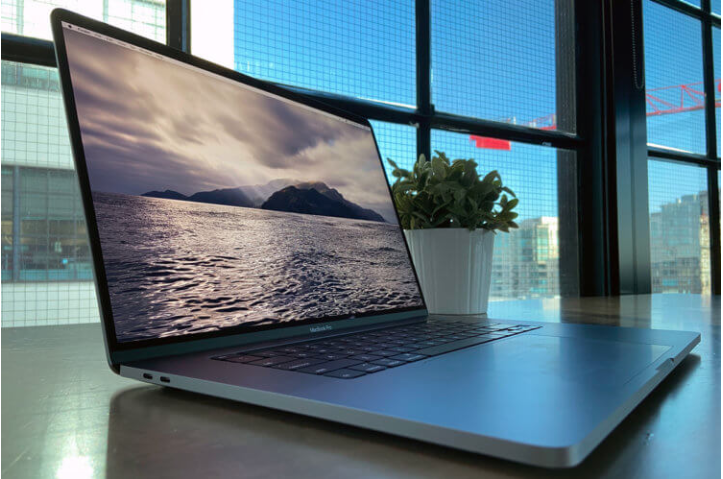 The mysterious organ of the new laptop is called the “lid angle sensor”, “lid angle sensor”, it is located on the border between the laptop’s cover and its main body, in its left part. The first of those unrelated to Apple’s vow of silence was iFixit employees discovering the brand new MacBook Pro. They were surprised, but in moderation, deciding that this was a replacement for the good old mechanism that caused laptops to wake up when the lid was opened and turn off when it was closed for more than thirty years. Once this manifestation of the “apple” genius was delightful, but these days, laptops of all manufacturers teach this simple trick. So, we decided to change it – who knows why? We recalled cases of spontaneous switching on laptops during transportation but did not begin to carry out a comparative analysis of the two mechanisms.

If Apple had publicly discussed the motives for its decisions, how many mistakes and miscalculations could have been avoided – stupid and destructive for its reputation? But at the time of Steve Jobs, the company had its own critic and evaluator of decisions made, and secrecy, the main source of fatal design decisions, did almost no harm. Even Steve was sometimes mistaken, but the unexpectedness of all kinds of small “things” shown to them during the presentations caused delight and bore fruit. Then Steve was gone, but the secrecy remained. There are geniuses who can see the world in all its versatility in Apple, otherwise, neither AirPods nor Apple Watch would have such success, but in the hierarchy of the company, the position of these geniuses limits their capabilities. And when everything is classified and most employees don’t have a clue what their neighbors are doing in the room behind the wall,

How people who are not affiliated with AASP (Apple Authorized Service Providers) got access to documentation “for official use”, I don’t know. And even if he knew, he would not have written about it. It turned out that the guys from iFixit, calling the new internal organ of the new MacBook Pro opened by them a sensor of the angle of inclination of the lid, were absolutely right, that is exactly what it is officially called. And above it, completing the repair of the display, service center specialists are required to perform the magic “calibration” ritual. For this, service centers are provided with a special tool. Alas, the source does not know anything about him. The version that this is just a smart sensor for opening/closing the lid of a laptop, which dozens of hardware and software engineers were seriously involved in creating and seriously branded with the “apple” metaphor, does not contradict it.

But the document, which fell into the wrong hands, did not for all once again draw the attention of “outsiders” to this innovation, which is invisible to the outside world, and with it, as it turned out, it is not so simple. It’s somehow complicated for this simple task. Too much effort and money have been invested in its creation. For all its abnormality, demonstrated to the world, Apple carefully considers its money and does not allow it to be spent on anything. Something is wrong here, don’t you? And the “flayer” from iFixit once again opened the long-suffering MacBook Pro and focused on its internal organ connected with magic. And they came to the conclusion that Apple really began to listen to what they say about it. But for good or not, we will soon find out. Moreover, Apple declined to comment, and all that is written below is just an assumption. Specialists

When talking about the 2016 MacBook Pro (another MacBook Pro 16!), I called it revolutionary and historic, I had in mind not only the Touch Bar and the world’s most advanced keyboard – the number of small, but very dangerous, unsuccessful innovations introduced into the design of these 13- and 15-inch laptops was second to none. The loop connecting the display and the graphics subsystem, which was previously a separate part, them has become an inseparable organic part of the display assembly. And it was located just so that with every change in the angle of inclination of the lid, the wires of this cable were worn out, not so much that the result of this manifested itself during the testing of laptops, but enough to cause real problems to real users. Sooner or later, the put into operation MacBook Pro lost contact with the screen.

I even came up with the seditious in essence thought: maybe there were no real reasons for force majeure to reduce sales of the MacBook Pro? And the decrease in their circulation was due solely to this and other unsuccessful decisions that users had to pay for, and Apple itself, in the end, suffered the damage? Or it was all even more insidious and unpleasant: what if it was done on purpose so that one fine day all of these annoying nasty things would be eliminated – cause a rush of demand, take the first positions in the ratings? 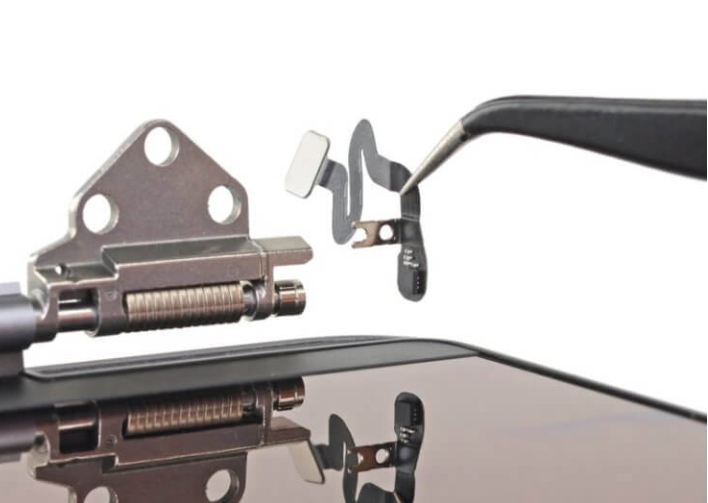 The angle sensor of the screen, with a decent set of electronics for some unknown purpose, according to iFixit experts, was created to eliminate this problem, in principle. I don’t quite understand how this sensor and the use of artificial intelligence can solve it – but the experts probably know better.

The dying problem (with the lid fully open, with its incomplete opening, it was clear that all the elements of the graphic subsystem worked flawlessly) was called the “Flexgate” screen, which was not very popular with journalists: this name was used several times before to indicate other situations. Including for a very similar one that happened with the MacBook Pro a few years before 2016, only then the solution to the problem cost $ 6 – the “tired” cable changed to a new one, and now – $ 600. It was necessary to change the entire screen. The train was an integral part of it. At first, Apple “went into failure”: there is no problem, some users mishandle (!) The laptop.

Remember Steve explaining to the public the groundlessness of their accusations against the iPhone 4, which, firstly, just needs to be kept right (by the way, I had no problems with it), secondly, others have even worse with it, but there were also- third, and fourth. Steve, who was getting worse, had to interrupt treatment and fly to Cupertino and solve stupid problems that could be solved without his participation (the flip side of any dictatorship), as it turned out, at the cost of his life.

In the case of Flexgate 2016, no one sacrificed anything. In 2018, Apple, without much ado, but nevertheless indirectly acknowledging the presence of some problems, slightly conjured with this loop, increasing its resistance to fatigue failure, but not solving this problem in principle. “There was something, but now everything is in order,” Phil Schiller answered a direct question. But in May 2019, for the 13-inch MacBook Pro, “with two and four USB ports,” Apple announced a program for free replacement of displays, and those who have already paid for such actions with their money promised reimbursement of costs. The most interesting statement “on a small number of MacBook Pro, rare cases of display malfunctions that lead to their failure have been identified.” Another “butterfly”?

Why is this sensor needed?

After iFixit and some media outlets published information about the mysterious new body discovered in the depths of the 16-inch MacBook Pro, speculations about why it was needed and what it was used for flooded the network. The most popular one is the variant of what iFixit thought about, only causing much fewer questions: the sensor “rings” at Apple, informing in a dossier of a particular laptop stored somewhere in North Carolina or Nevada about all the manipulations with the lid. And when the repair comes, at the request of an authorized service center, Apple will give an answer about the possibility of replacing the display at the expense of Apple. Suddenly, the user (or his children) just indulged in opening and closing the lid for several hours, with the goal of depriving Apple of several hundred dollars?

There are other opinions. The angle of the lid changes the acoustic properties of the case, and the new MacBook Pro “has the world’s best 6-speaker audio system”. I don’t know what about the best in the world, but it really is really nothing, and in order to make it even a little better Apple wouldn’t regret it, this is a fact. The angle of the lid also affects the image on the screen – what if the sensor is used to optimize it? Apple collects data on how users handle the covers of their MacBook Pro, but not for the purpose of punishing someone for this, but rather to use this data to finalize the design.