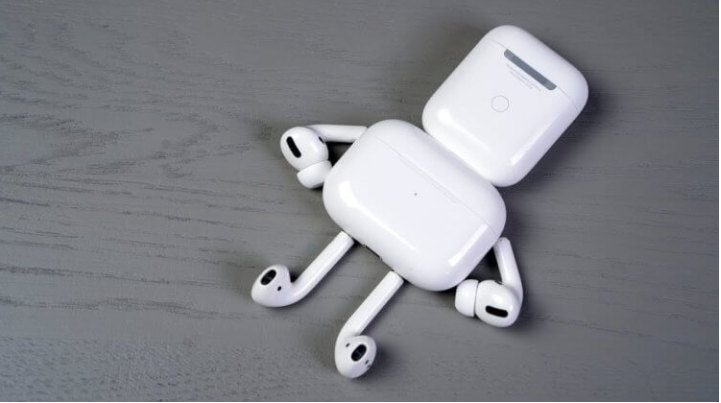 Apple corporation has always been ahead of the rest in terms of technological innovations. And it was she who introduced us to the world of wireless music, forever abandoning the 3.5 mm jack in her flagships and presenting an excellent alternative in return. Going out into the city park, while being at the subway station, you notice a lot of people who have the same iconic Apple wireless headphones in their ears that you can’t confuse with any others. Of course, the popularity of this accessory is associated not only with its stylish design but also with its extraordinary ease of use.

The magic of pairing with the iPhone, comfortable switching between gadgets tied to one iCloud account, active noise reduction in the Pro version and quite acceptable autonomy – all this made AirPods, perhaps the most popular accessory for the iPhone. And many more use them not only for listening to music and podcasts, but also as a headset for telephone conversations, which is very convenient, for example, in a car. Here’s just how to find out how much more time you can listen to music, and when you need to recharge the accessory, so as not to be left without a convenient headset during a meeting on Zoom or an important phone conversation – for an inexperienced user it is not always obvious. Let’s try to figure this out.

The easiest way is, of course, to ask Siri. When asked about how much charge is in my AirPods, she will always answer quite clearly.

There is another way to check the charge level of the batteries of the AirPods and the case through the “Batteries” widget. First you need to add this widget to the Notification Center. For this, on the first screen of the iPhone, swipe to the right and scroll up all installed widgets and tap the “Change” button below. And in the opened list of available widgets we find the desired one and add it with a plus sign, after which we tap “Finish” in the upper right corner.

Now, after opening the cover of the case and swipe to the right from the first screen of the iPhone, the “Battery” widget will show information about the charging status of the iPhone, AirPods and the case for charging. And if you remove one of the headphones, the widget will additionally show the charge level of each headphone separately. By the way, when the case is closed, but the headphones are safely used by the owner, the widget shows the charge level of their battery. And this can be much more convenient than taking out the case, bringing it to the iPhone, opening the cover and waiting for the information window to appear. In any case, the choice of method is yours.

How many AirPods hold charging

On its website, Apple assures us that the 2nd generation AirPods can play music for 5 hours without recharging, and in a telephone conversation can last up to 3 hours. But it is worth noting that the volume was set at 50%, and the playlist contained 358 different audio tracks in AAC format 256 kbps from the iTunes Store . AirPods Pro with a volume level of 50% and noise reduction enabled should provide 4.5 hours of listening to the same audio tracks.

As a result, in the first year of operation, never (at least for me) did the 2nd generation AirPods win back the 5 hours announced by Apple. Actually, without phone calls, only in the audio listening mode, a steady 3.5-4 hours passed before disconnecting one of the headphones. In a telephone conversation, I managed to squeeze out up to 2 hours 20 minutes before disconnecting one of the headphones.

Over time, autonomy begins to decline markedly, and after a year and a half of everyday active use, you begin to notice that the headphones have been playing audio for not four, but three hours, and in the talk mode one of the headphones falls off after 1.5 hours.

Experienced users of apple products have noticed since the first generation of AirPods that the left and right headphones do not discharge at the same time. As a rule, when 12-13% still remains in one earphone, the second one already gives out a distress signal and switches off very soon. For me, for example, this almost always happens with the right earphone, but I know users who have the left earphone disconnected first.

The question is, is this normal? After all, Apple does not write anything on its website about the simultaneous discharge of headphones, and initially both batteries have the same capacity from the factory. The thing is that only one earphone works as a microphone, as a rule, this function is automatically assigned to the right one. Over time, the battery capacity of a constantly used earphone as a microphone may decrease.

Therefore, Apple has provided in the settings how to use the microphone of a particular headphone. You need to open “Settings” → “Bluetooth”. Opposite the name of your headphones, press “i” in the circle and select “Microphone” in the settings menu that opens, and then on the next screen set either AutoPods auto-switch or assign a function to a specific headphone.

How to charge AirPods correctly

True-wireless Apple headphones are designed in such a way that they only charge while in the original charging case. The manufacturer himself insists that after use we put the headphones in the case, where they are not only safely stored, but also charged. The 2nd generation AirPods and AirPods Pro case itself can be charged both wirelessly according to the Qi standard, and via the lightning port with a proprietary USB cable.

Accessories are arranged in such a way that when you connect the case with the headphones packed into it to the power source, the charge of the headphones themselves, first of all, begins to be replenished, and when it is replenished, the case itself starts to charge. This was also a separate article on our website. Everything has been done so that the user can recharge the discharged accessory a bit and use it almost instantly.

Apple on its website indicates that 15 minutes of recharging new AirPods in the case provide up to 3 hours of listening to audio and up to 2 hours of talk time, and 5 minutes of charging new AirPods Pro in the case provide up to 1 hour of listening to audio and the same for phone calls. My experience with the 2nd generation AirPods speaks of slightly different, smaller numbers, but in any case, the small, simple earphone in the case, which was discharged first, allows me to continue the conversation after the discharge of the second earphone.

In general, the battery capacity of the case really allows several times during the day to fully recharge the headphones, and this is enough to start using the headphones the next morning without putting the case on charge at night. The case itself, together with the headphones completely discharged, charges up to 100% in about 2.5 hours.

To estimate the battery power of your AirPods, you need to open the case cover. At the same time, if the headphones are in the case, then the green indicator indicates sufficient charging of their batteries. Orange indicates charging is required. If you put the headphones out of the case, close it, and then open the cover, the indicator will show the approximate state of the battery of the case. Green indicates sufficient charge, and orange indicates that less than one full charge cycle remains.
0
Share