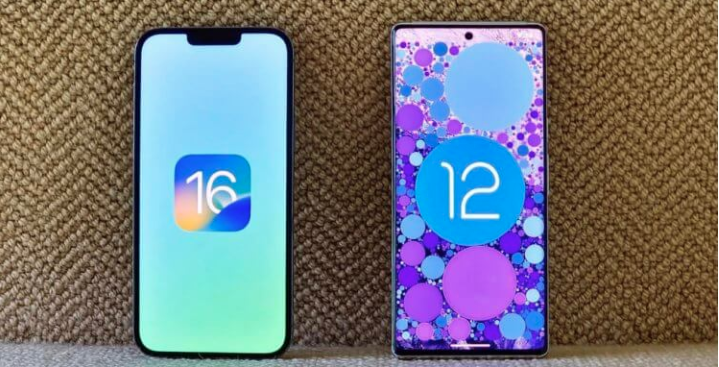 Year after year, after every WWDC, Android fans claim that Apple steals the main features of their system. Apple fans fight back as best they can, proving that it was in Cupertino, and not anywhere else, that the function was invented in the form in which it exists. The site has already published material that widgets on the lock screen in the form in which they will be in iOS 16 Apple invented itself, especially for Live Activities. Now let’s look at the things that were borrowed from Android.

I may be one of the few people who will say that the lock screen on iOS 16 looks great. The ability to add a depth effect allows you to make your favorite wallpaper voluminous, and widgets that have migrated from the Apple Watch dials add a lot of functionality to the lock screen. The ability to change the font and its color will allow you to give your iPhone a real personality.

However, the pioneer in this business was Google. Android 12 introduced the ability to set the font color to the color of the wallpaper or choose from four Materials as your base colors. Google also has a widget called “At a Glance”. Google calls it a widget, but I would choose a different name for it – an information field.

The maximum that you can see in it is the weather, the current date, an upcoming event, or information about your flight. There is no way to change the information displayed by this field. Widgets in iOS 16 have a much larger selection of information provided to the user and an open API for third-party developers.

In iOS 16, the Photos app learned how to automatically share photos with selected users. You can mark a date after which all photos will automatically go to a shared album or the system will recognize a person and upload them to it.

The camera app even has a separate button for adding photos to a shared album. Now it is possible for all users who have access to it to add, edit or delete photos. Everyone has equal rights to manage snapshots.

Google Photos has had this feature for several years now. All the same chips as Apple, but they also add automatic creation of albums with specific people and the ability to share them. Moreover, access to such albums can be provided not only for viewing but also for adding photos.

iOS 16 introduced the ability to interact with the text that you dictate, directly at the moment of dictation. Simply tell your smartphone what you want to do and it will do it.

The main feature can be considered automatic completion of punctuation marks. Now you do not need to say the words “comma” or “colon” during dictation. Your device will do everything by itself.

The whole thing is a clone of the Google Assistant voice dialing from the Pixel 6 and 6 Pro. All the same functions for interacting with text and punctuation were already in Android.

What has been in Yandex.Maps and Google Maps for a long time has finally appeared in Apple. Now their branded maps can build complex routes with multiple stops. We’ve been used to this for a long time, but it’s a loud feature for Apple.

Branded maps in iOS appeared back in 2012 and have come a long way since then and, fortunately, do not send drivers into oncoming traffic on a one-way street. However, they learned to build routes with several stops only in 2022. At the same time, Google maps for both iOS and Android have supported this since 2016. Many users, therefore, did not use branded Apple Maps.

For Russia, Apple maps are practically irrelevant due to their low detail, so even these new features will not add to their popularity in our country.

Live Captions, or, more simply, live captions can be watched on YouTube since 2019. This is a technology that allows you to create online subtitles from voice. Now Apple has such an opportunity, and Cupertino added it immediately for both voice calls and FaceTime.

In fact, for people who are hard of hearing, this feature will be in great demand and will allow them to communicate more freely. It is very pleasing that such things are actively promoted by manufacturers and an increasing number of devices receive such chips.

Of course, Apple has copied enough features from Android and not only from it, but we must not forget about the notorious approach of Apple. For some reason, when Cupertino takes over the implementation, it just works for them and pleases the eye.

Myths about AirPods that are still believed

6 ways to find out which iPad you have